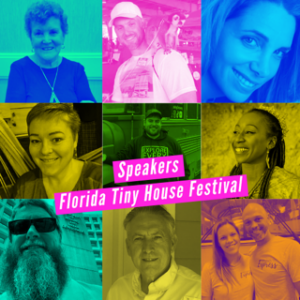 Update (November 15, 2022): Please join tiny living enthusiasts from around the world for a weekend of INSPIRATION and INSIGHT with the INCREDIBLE line-up of SPEAKERS who will be PRESENTING and SHARING during the 7th Annual (2022) Florida Tiny House Festival. 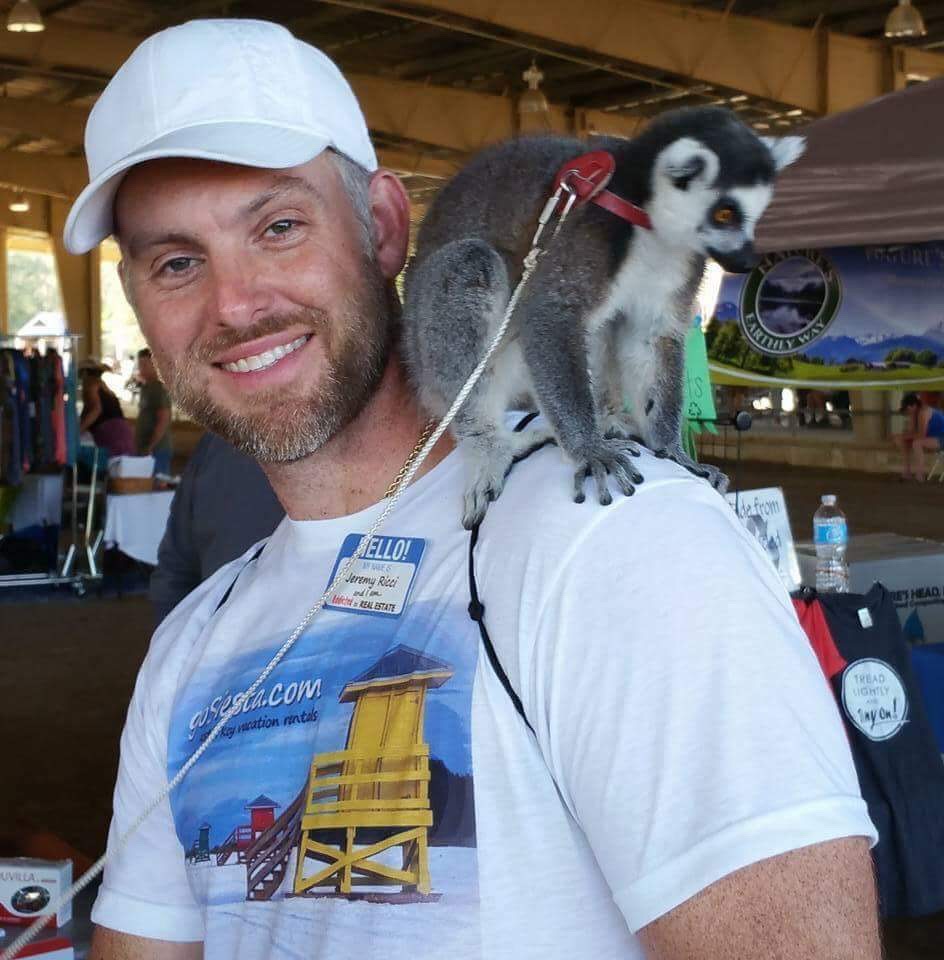 Returning again to the For-Charity Tiny House Festivals is Jeremy Ricci, but this time Jeremy is the Host and Owner of this year’s location… Tiny House Siesta!  Jeremy is also the Owner of Tiny House Leadville, which is another of Jeremy’s incredible tiny house resorts!  Jeremy operates tiny house vacation properties in Florida, Colorado, and is soon expanding to other locations.  Over the years, Jeremy has purchased 30+ tiny houses… some used, some new, and some custom commissioned builds. He has learned A LOT of “do’s” and “do not’s” along the way and hopes to share his experiences so others may benefit to get what they’ve bargained for and avoid some of the potential pitfalls. 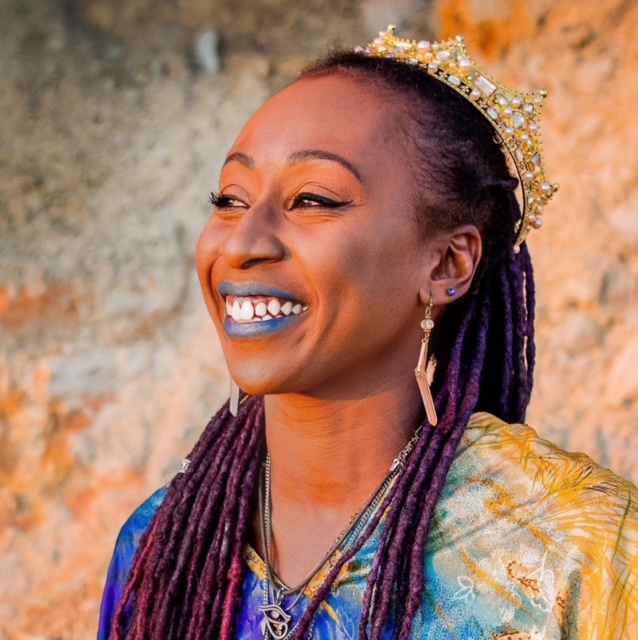 Queen Tasha has been a Full-Time Solo RV nomad for the last 4 years. She has traveled around the country in her self-renovated class C RV named The Purple Palace and documenting her journey on her YouTube channel Queen Tasha TV.  Although she has no official home base, she calls Florida Home, mainly as a “snowbird” in the winter; she is originally from Maryland.  What lead her to RV life was the “Tiny Home on Wheels” movement on TV that showed her how to live an alternative lifestyle free from social norms and experience life more fully. In 2021 she co-hosted the Black Nomads Meetup and started the Black Travel Tribe to support other nomads like herself to find community and freedom on the road. In 2023, she will be hosting the 1st Black Tiny Home Festival in 2023 to bring together the community and show the representation of Black and Brown people in the “Tiny Homes on Wheels Movement”.  Queen Tasha is a published author, and the owner of Royal Armor Natural Products.  To follow and learn more about Queen Tasha and her endeavors, please visit www.queentashasempire.com or on IG @queentashasempire. 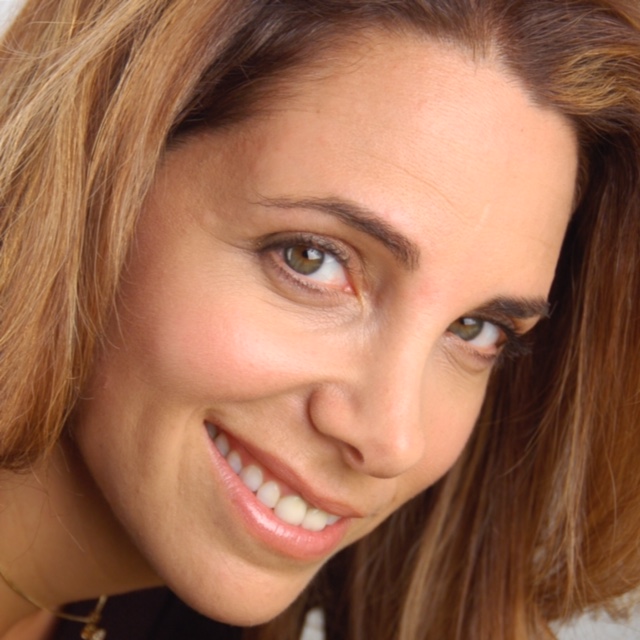 Felice Cohen, known nationally and internationally as the woman who lived in one of the world’s smallest apartments, is the author of the Amazon bestselling memoir Half In: A Coming-of-Age Memoir of Forbidden Love. Felice’s previous book, 90 Lessons for Living Large in 90 Square Feet (…or More), the recipient of numerous self-help book awards, was inspired by the YouTube video of her 90-square-foot New York City studio that went viral with over 25 million views. Felice has been featured on Good Morning America, NBC, CBS, NPR, Time, Globe & Mail, New York Daily News, the Daily Mail and more. What enabled Felice to “live large” in that tiny studio is that she has been a professional organizer for over 25 years. As the grandchild of two Holocaust survivors, Felice is also the author of What Papa Told Me, a memoir about her grandfather’s life before, during and after the war. The book has been endorsed by Elie Wiesel, is taught in schools across the country, has been translated into Polish and has sold around the world. Felice splits her time between New York City and Cape Cod, MA. 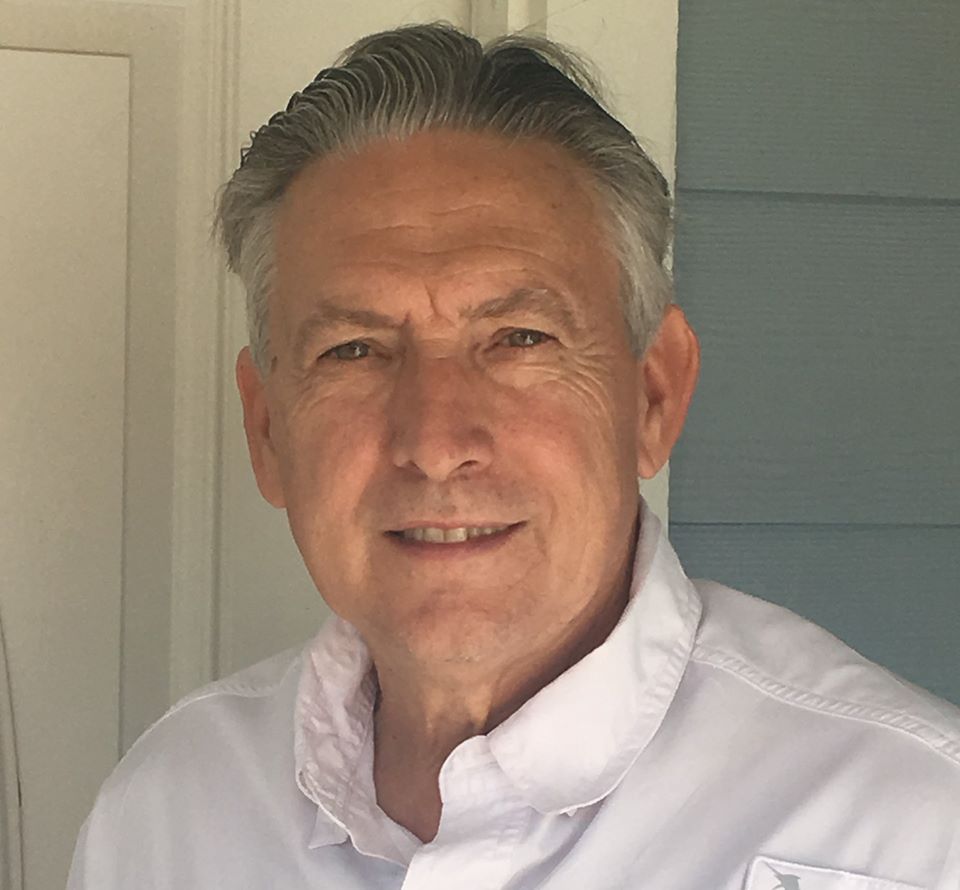 Robin Butler is the CEO of NOAH, a third-party inspection & certification company. He is co-chair of an ICC (International Code Council) subgroup working to recognize Best Practices and Innovation in Code Administration. He has presented to hundreds of Tiny Houser’s and has always proven to be informative & enlightening. 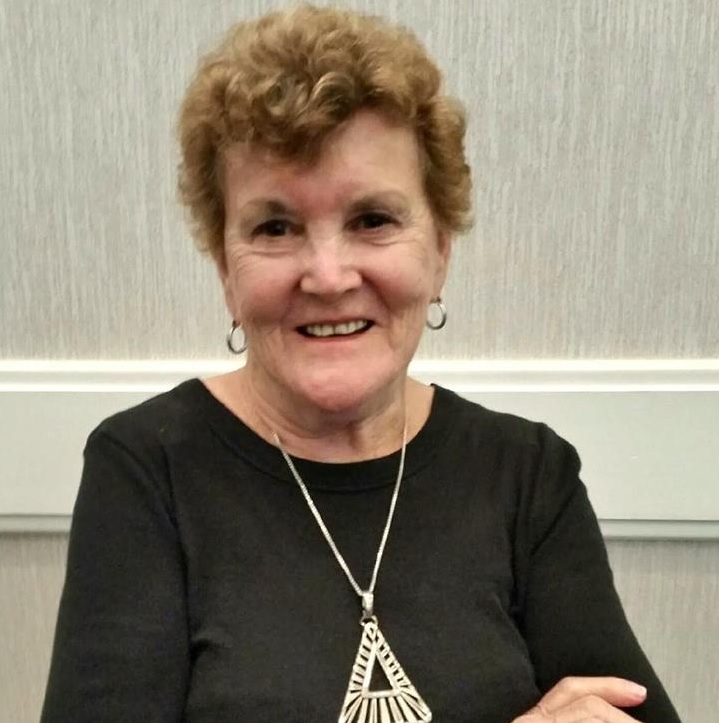 Pat Dunham, known as the Tiny House Advisor, is a tiny spaces consultant and specialist who is an expert in outlining ways one can live comfortably in their own small space.  Her ideas work for space-challenged living environments from tiny homes to efficiency apartments to RV’s and boats.  Long before the tiny house movement began, Pat lived a life in tiny living quarters for several years aboard a boat with her husband and six children and now lives with her husband and 35-lb dog Annie in their own 235sqft. tiny house. She speaks on the many benefits of living small, while offering practical advice for downsizing and useful tips for creating storage solutions.  Pat and her many space-saving ideas can be found online at Tiny House Advisor. 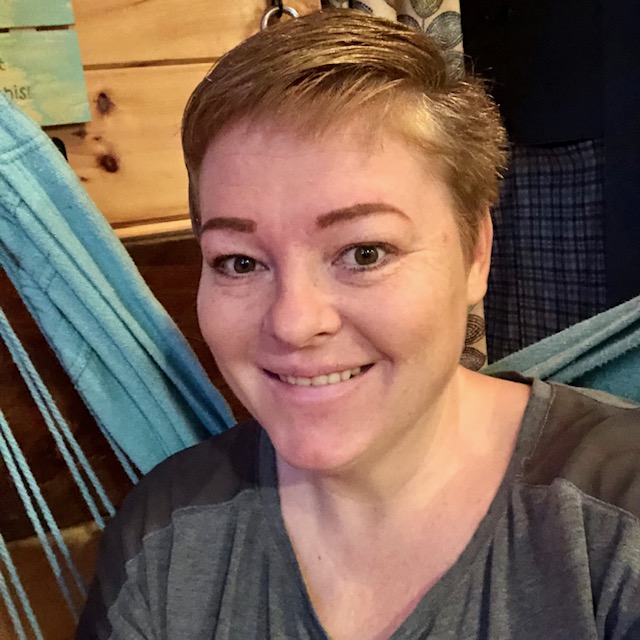 Melanie is the National Spokesperson for the Tiny House Alliance USA. She is an advocate for legal tiny living and a supporter of ASTM standards for tiny houses. After building her 144 Sq ft. tiny house on wheels in 7 days she went from living illegally to being a legal tiny house on wheels land owner. She recently published a book, Trailblazing Tiny: A Guide to Breaking Free, to help others track and create their own tiny dream. She is a DIY builder, a writer, speaker, homesteader, and runs her own wood burning business. In her spare time, she backpacks, travels, hikes and enjoys her home and land with her husband of 21+ years, along with their dog Shiloh, and her many chickens! 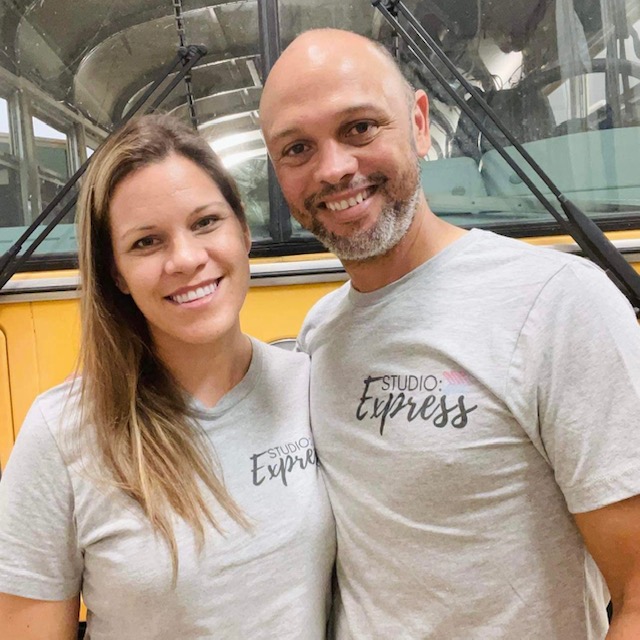 Erick & Krystle Lopez are the owners of Studio Express.  In 2021, they blew away the nomad and tiny living scene away with their amazing conversions and bus exterior paintings.  They are nationally-recognized bus/van conversion specialists, RV renovators, artists, travelers, & people encouragers.  As they put it, “We were created to create!” You can check them out on Instagram at @Lopez_AroundTheWorld! 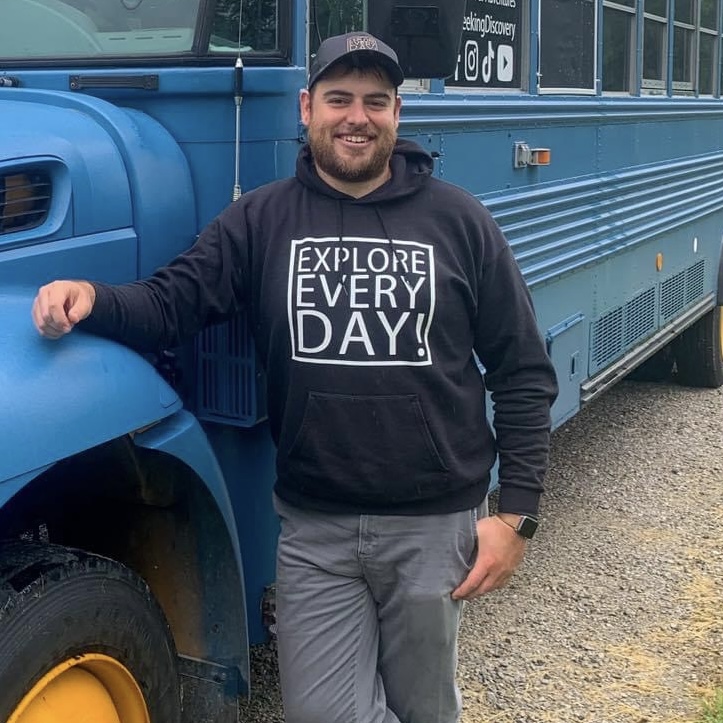 After getting laid off in 2020, Ryan Thompson decided to purchase a school bus to convert into a tiny home on wheels to have the freedom to travel while working remote online.  Ryan’s build took about 9 months to complete and his budget was $25K.  Ryan’s skoolie is designed for friends and family to come on the road with him and can sleep 6 adults comfortably.  Ryan’s skoolie has a living room, dinette, full kitchen, bathroom, and bedroom. Complete with 100 gallons of fresh water and 1400 watts of solar to keep Ryan powered while he’s on the go. If you want to learn more about Ryan and his bus adventures be sure to check out his build videos over on his Youtube Channel!  And if you prefer shorter content you can find Ryan on all major social media @SeekingDiscovery… and visit him on his web site at Seeking Discovery. 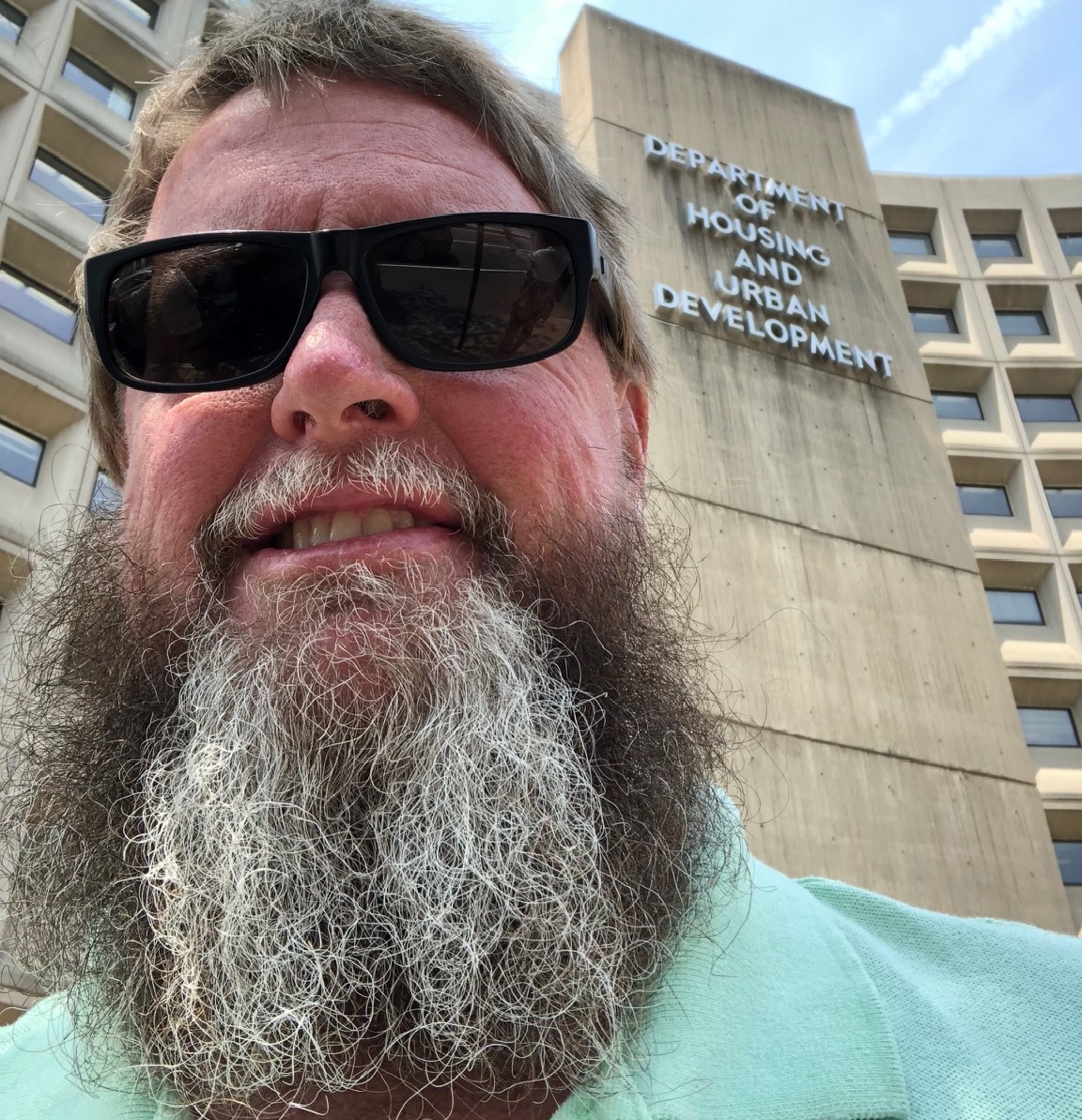 John is the co-founder, along with his wife Fin, and the Chairman of the United Tiny House Association.  John and Fin are two of the truest examples of the tiny house movement… living full-time for 11 years in their DIY, off-grid 304sqft Beloved Cabin and the owners of their 16-acre Beloved Cabin Tiny House Homestead & Stay.  They also own their World-famous towable Tiny Firehouse – Station No. 9, a second towable tiny house they call “Rocco”, a 14’ yurt, a skoolie, and they are currently building a tree house with a grain silo.  John is a known DIY and re-purposing expert, and as an off-grid specialist.  He is also a tiny house and affordable housing advocate, and has been invited to speak at HUD in our Nation’s Capital, numerous colleges, and many events around the Country, as well as with local state and Federal governments… including HUD in Washington DC… on the subjects of affordable housing solutions.  John and Fin have been featured on A&E, HGTV, The DIY Network, Apartment Therapy, Hobby Farms, TODAY, The Rachel Ray Show, JEOPARDY!, AOL, Yahoo, and MANY other networks and media outlets around the World.  John, along with his wife Fin, are not only Airbnb Superhosts, but they are also members of the exclusive Airbnb Ambassadors. 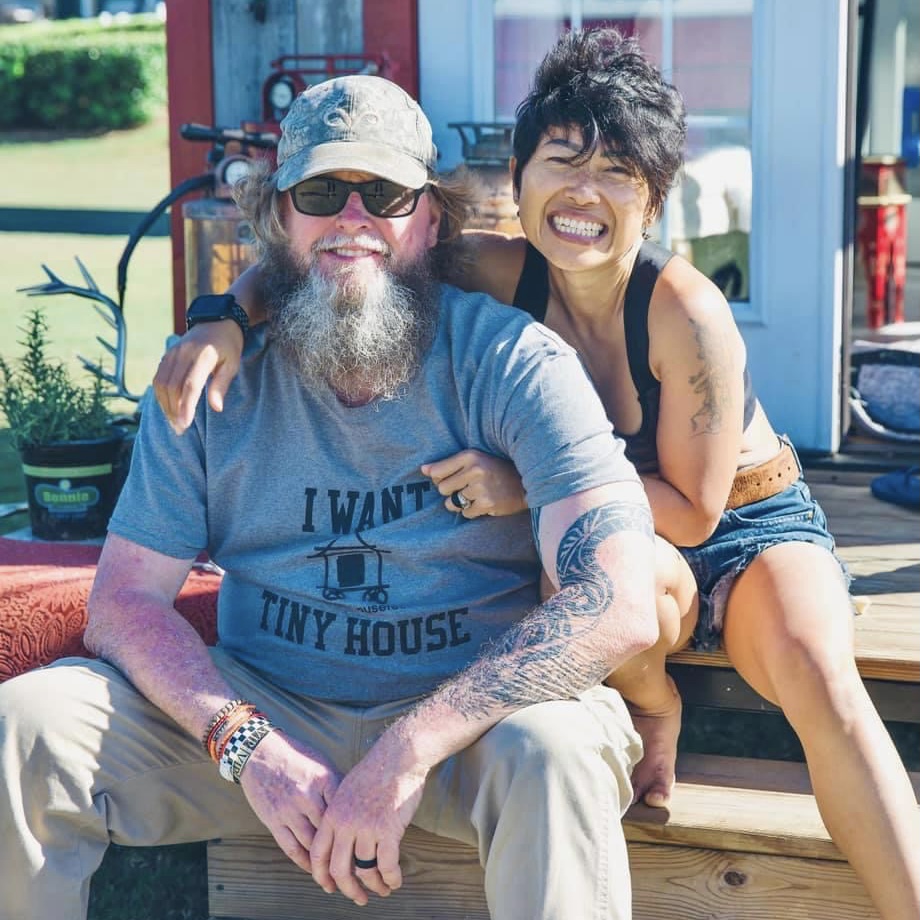 Interested in learning more about the 7th Annual (2022) Florida Tiny House Festival? Please feel free to contact us at unitedtinyhouse@yahoo.com or by calling our office at 706-623-4332.